For years employers have complained that our education systems were not preparing students to meet the demands and expectations of employers. Only 28 percent of recent college graduates were rated as excellent by employers in the area of critical thinking skills (and a disturbing 0 percent rating for high school grads). This comes at a time where critical thinking, complex problem solving, and judgment were the top 3 skills in demand for 9 out of 10 top jobs. 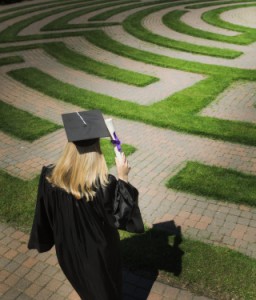 The message is clear. Employers are telling schools, colleges, and universities to **** or get of the pot!

As a first step a few organizations are beginning to make a statement.  They have scrapped academic accomplishment in exchange for skill-based criteria as a minimum hiring requirement.

Ernst and Young, one of the largest recruiters of college grads, “found no evidence to conclude that previous success in higher education correlated with future success in subsequent professional qualifications undertaken.” Even earlier PricewaterhouseCoopers (PwC) adopted a similar stance.  Since many employers seem to follow the lead of both of these highly respected organizations, other organizations are likely to follow.

The bottom line is that employers need competent talent. They need to be certain that new hires can compete in today’s volatile, uncertain, and ever-changing workplace. Many are finally doing what it takes to acquire it, even if that means discarding several sacred cows of employee selection, including minimum education requirements.

How dire is the situation?

Edward Gordon, a respected thought leader and author of several books on the employment skills crisis, recently wrote in his newsletter that the

“mismatch between [job skills required and preparedness of workers] has been building for more than 20 years. It is a structural and systemic economic issue directly related to obsolescent education-to-employment systems at the regional and national levels and the failure of businesses to provide training to new and incumbent workers.”

“It has become very apparent that partial reforms, piecemeal plans, and concession to the status-quo have placed much of the current and future workforce in jeopardy…defending an outdated workforce preparation system designed for a less-demanding 20th-century labor market. That era has disappeared.

Does this mean college education is not important?

Hardly. Don’t even think for a moment that a college education doesn’t help develop skills such as time management, commitment, and the ability to prioritize. It also provides an ample foundation of functional skills in areas of language, finance, science. But as far as employers trusting that a college degree implies adequate preparation for decision making and problem solving – forget about it. And as far as securing a good paying job with any assurance of employability 5 to 10 years from now, high school diploma only jobs are surely headed for extinction.

Schools and universities must start delivering graduates with workforce ready skills. If they don’t respond quickly, candidates won’t pay for it and employers won’t depend on college education as the door-opener for a good paying career.

For employers, it’s time to reevaluate your minimum hiring requirements especially minimum education. In order to avoid missing out on talent, what are the best predictors of future success if a four-year degree isn’t one of them?

Is It True What They Say About Millennials?