How many people do you know who are afflicted with workaholism?  Our research has recognized 4 types.  You might even recognized yourself in one of the types.

First, let’s sort out a little confusion. Often times employee engagement is confused with workaholism. While many of you may work hard and be engaged, others might be busting your butt…and disengaged. 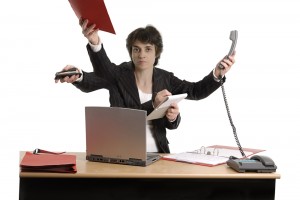 Michael Haberman in a recent post nailed it when he wrote “being a workaholic is not the same as being engaged.”

Engagement is positive. Despite the hard work, long hours, and sacrifice, some people truly love their work. In a quote attributed to Confucious, “Choose a job you love, and you will never have to work a day in your life.” That’s engagement.

Workaholism, on the other hand, is negative, according to University of Georgia professor Lindsay Lavine.

According to Clark and her team, workaholism is like an addiction. Like the addict, workaholics experience the initial “high” but quickly get overwhelmed, stressed, and irritated. Work isn’t fun but something they must do. They can’t stop thinking about it. They become obsessed. They work more and work harder to get another high.

For the workaholic, self-esteem is intertwined with work. If not working hard and/or not getting acknowledgement for all his sacrifice, his ego is hurt. Work isn’t a means to an end – it is the end figuratively and literally.

Workaholics defend their addiction like alcoholics defend their drinking. They make excuses. Beyond the stereotypical denial, they downplay and deny the problem. They rationalize by blaming others for the workload. “What does it matter? I’m not hurting anyone but myself,” they say. “I can stop anytime I want,” they tell themselves.

Companies, management, and even society even encourage and reward workaholism. Workaholics are applauded and put on a pedestal for their dedication, commitment, and loyalty just like the alcoholic is “admired” for the amount of alcohol he can consume and still appear sober.  Rewarding workaholism is like designating the alcoholic as your driver because he’s the most sober in the group. No matter how much he contests or you rationalize, he’s still impaired.

Ultimately workaholism takes a personal toll. The associated negativity and stress doesn’t stop at the office because even when the workaholic isn’t at work, he’s thinking about it. From broken marriages to stress-related illness addiction to work carries a heavy price. Divorce, family conflict, and poor health (both mental and physical) are all possible consequences of workaholism.

Employers might ignore these personal issues if the problems don’t just stop there.  But workaholics make more mistakes. They are involved in more accidents. Their workaholism becomes their badge of courage. It becomes synonymous with self-esteem. Decisions they make are made to protect pride or build ego, not for the good of the team and company. Many workaholics are sleep deprived.  Others are so stressed and burned out that clarity is long gone.

A propensity for workaholism can be uncovered using the Quality of Motivation Questionnaire. It’s important for individuals and organizations to recognize workaholism and help those “afflicted” to it.  Managers need to encourage engagement and not contribute to workaholism. The consequences and implications can be devastating to the employee and the company.

Here are four types of workaholics we have identified:

1. Defeatism. The defeatist denies himself pleasure. This is one of the strongest drivers of workaholism. Excuses abound for the defeatist in action:

“The work will just pile up if I took any time off.”

The defeatist gets his fix through personal sacrifice. He’s the one who works late and misses his children’s game and school play so a co-worker can go golfing or get a manicure. He’s the one that gives up his favorite lunch because a co-worker forgot hers. The “thank you” initiates a warm feeling – it’s the quick fix. Unfortunately the guilt sets in soon after he realizes he missed again something he might enjoy.

2. Sabotage. The saboteur loses things he values… or at least used to value. Carelessness marks the workaholic afflicted with self-sabotage because he’s distracted and obsessed with work. He might neglect his health – no time to waste at a doctor’s office. He forgets his wife’s birthday and cancels an anniversary dinner because his boss asked him to finish a project. He misplaces a “thumb drive” that has all of his presentations on it but didn’t take time to back it up.

3. Punishment. This is the one of the most common causes of workaholism. “Nothing comes easy” and “no-pain-no-gain” have become the battle cry of the American work ethic. Now I’ll be the first to admit that effort and sacrifice are essential ingredients for success.  In fact, some degree of self- punishment is required to build pride.  It’s a given that we gain confidence when we push ourselves beyond our comfort zone and achieve something we didn’t think we could do. But when hard work becomes addiction to work, we begin to take more and more risks. We build a tolerance and then have something more to prove. If something isn’t working out despite all our effort and hard work, it must be because we aren’t working hard enough!  Punishment once engaged becomes a self-sustaining negative behavior. We ignore warning signs and endure unhealthy levels of pain and stress. We become overconfident in our ability to recognize our limits. Courage leads to fearlessness and then to recklessness. The punisher starts by injuring only himself but over time begins to put others at risk too.

4. Martyrdom. Misery loves company personifies this behavior. This is the “woe is me” source of workaholism. It stems from a sense of hopelessness and futility.  Even when opportunities to lessen the workload or get relief present themselves, the martyr declines the help.  “What difference will it make?” he thinks.  “You just can’t find good help today” brings a chorus of agreement which is exactly the response that gives him the “jolt” to keep going.  At least he feels that someone understands him.  Martyrs don’t really want to stop working so hard. They want others to feel pity and agree that life’s a bitch.

Perhaps you recognize yourself in some of the examples.  What steps should you be taking on the road to recovery?

Success – however you define it – doesn’t mean you have to sacrifice everything. Work-life balance doesn’t work either. It forces you to think about work and life as a tradeoff.  If you think about work or life, you will always think in terms of what you have to give up.

The most successful people in life are those who figure out how to integrate work-and-life. How well are you doing? How successful are you at integrating work and life?

Thankful for Your Employees? Show It This Thanksgiving