And small business is the center of the jobs universe when it comes to creating new customers.

Of the 7 billion people on Earth in 2012, 5 billion are over the age of 15. Of those 5 billion, 3 billion say they want a full-time, formal job. The problem is there are only about 1.2 billion of those jobs in the world today. That means there is a potentially devastating shortfall of nearly 1.8 billion jobs.  (Source: Trends Magazine April 2012).

That daunting scenario only exacerbates the problem facing most developed and developing countries: job creation. But so far, governments have focused its resources on those who “need help,” rather than on those who are in a position to “offer help.” Specifically, small and medium sized businesses have always been the primary job creators and employers. They understand what it means to create customers who generate the revenue that enables the hiring of employees. 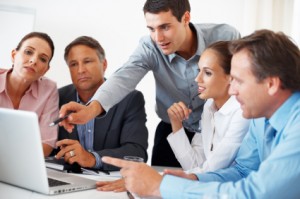 For example, based on what consumers knew and the music industry wanted, there was no need for an iPod.  Verizon, ATT, and Sprint didn’t want smartphones and iPads.  The movie industry didn’t want Netflix. Kodak didn’t want digital photography.  But entrepreneurs envisioned a different future that created customers for new products and new uses of old products.

Job creation really depends on customer creation, not the other way around.  Adding jobs to government payroll gives people work but doesn’t create new customers. That’s a short term fix, not a long term solution. Businesses know that the lifeblood of a company is paying customers. The jobs then follow.

In his book The Coming Jobs War

Gallup Chairman Jim Clifton underscores this point when he states, “If countries fail at creating jobs, their societies will fall apart. Countries, and more specifically cities, will experience suffering, instability, chaos, and eventually revolution. This is the new world that leaders will confront.”

Countries, states, and local communities that learn to harness the power of small business and entrepreneurship will be the ones that see tremendous economic growth and job creation.  Capitalizing on new ideas and better, more productive ways of working has always been at the heart and soul of United States leadership.

Our future depends on customer creation, not job creation. Celebrate and support small business, the champions of job creation through innovation and entrepreneurship,  during  National Small Business Week – May 20-27.